Why bread stopped having prominence and why it returns with force

Welcome to the Richemont Blog. This Blog was born with the purpose of clarifying elementary concepts about bakery and pastry, to transmit and disseminate knowledge based on studies conducted both at the Richemont Fachschule in Lucerne, and local data and knowledge provided by the different Richemont Clubs distributed throughout Europe and South America. The objective is to talk about elaboration processes, about the ingredients and other topics of interest that may arise. We are open to topic proposals by the presidents of the different Richemont Clubs, the Club members and the students of the Richemont Craft School.

We know that bread has suffered a series of false myths in recent times. It has lost its reputation and its importance as a highly nutritious food. We have read for years that bread is fattening, that it is responsible for many of today's food intolerances or that bread contains excess salt etc. Until it is no longer seen as food, but a mere side dish in a meal.

We are faced with the situation that sales and bread production numbers continue to fall throughout Europe since 2010. 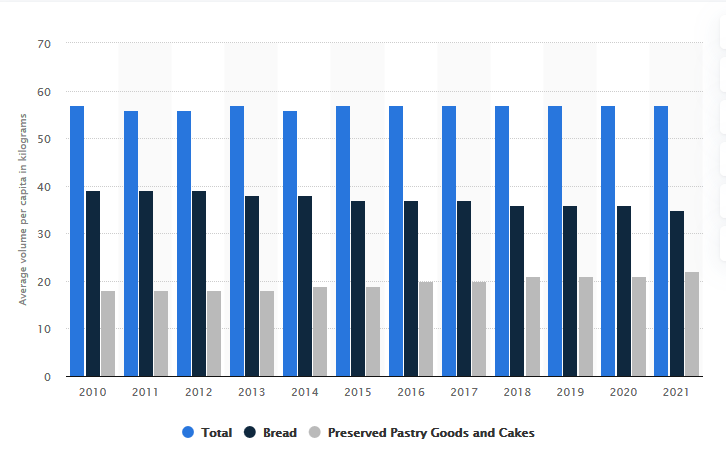 Development of the average per capita consumption in Europe from 2010 to 2021, by category (in kilograms).

What is happening in the world of bread? Why do bread sales go down despite their cheaper prices? Do false myths have anything to do with the drop-in sales? Are false myths true or just bad publicity for the bakery sector?

Given the accusations that bread is one of the causes of many intolerances, such as gluten, we must be cautious when it comes to distinguishing the type of bread we speak of. Are we talking about bread made with leaven? In that case, there are studies that show that the gluten and sugar index of breads made with sourdough are much lower than those made with chemical yeast.

Sourdough is nothing else than a natural ferment produced from the mixture of flour with water. It adds taste and aroma to the bread. In addition, the bacteria make it a more digestive food, as well as other foods that also contain fermentation agents, such as yoghurt. The sourdough increases the nutritional value of bread by providing important nutrients.

It can be said that the bread has been exposed to a series of false and unfair prejudices over the past decades. In addition, new habits and diets in European families arrived with the appearance of supermarkets. Consumers started to purchase semi-prepared, ultra-processed and frozen food, which in many cases have replaced, for example, the classic slice of bread with jam for breakfast.

The haute cuisine has turned chefs into great connoisseurs of the seas and forests, with which they earn Michelin stars. They are experts who cook with nitrogen, while remaining great defenders of the traditional taste. The world of bakery is beginning to live or wake up to its own little revolution. Food science has been able to confirm as false many of the myths published by North American nutritionists in which bread was described as the bad guy. Little by little we understand the responsibility we have as bakers; to produce a healthy bread and quality food that is highly nutritious, sensory, sustainable and tasty when it contains sourdough.

At Richemont, we want to contribute to this global awakening by sharing our knowledge, studies and scientific data that confirm that bread is the new king of the gastronomic world and that its consumption is as important as drinking 6 glasses of water a day.

If you want to know more, subscribe to the blog. In three weeks, we will tell you more!

No comments made yet. Be the first to submit a comment